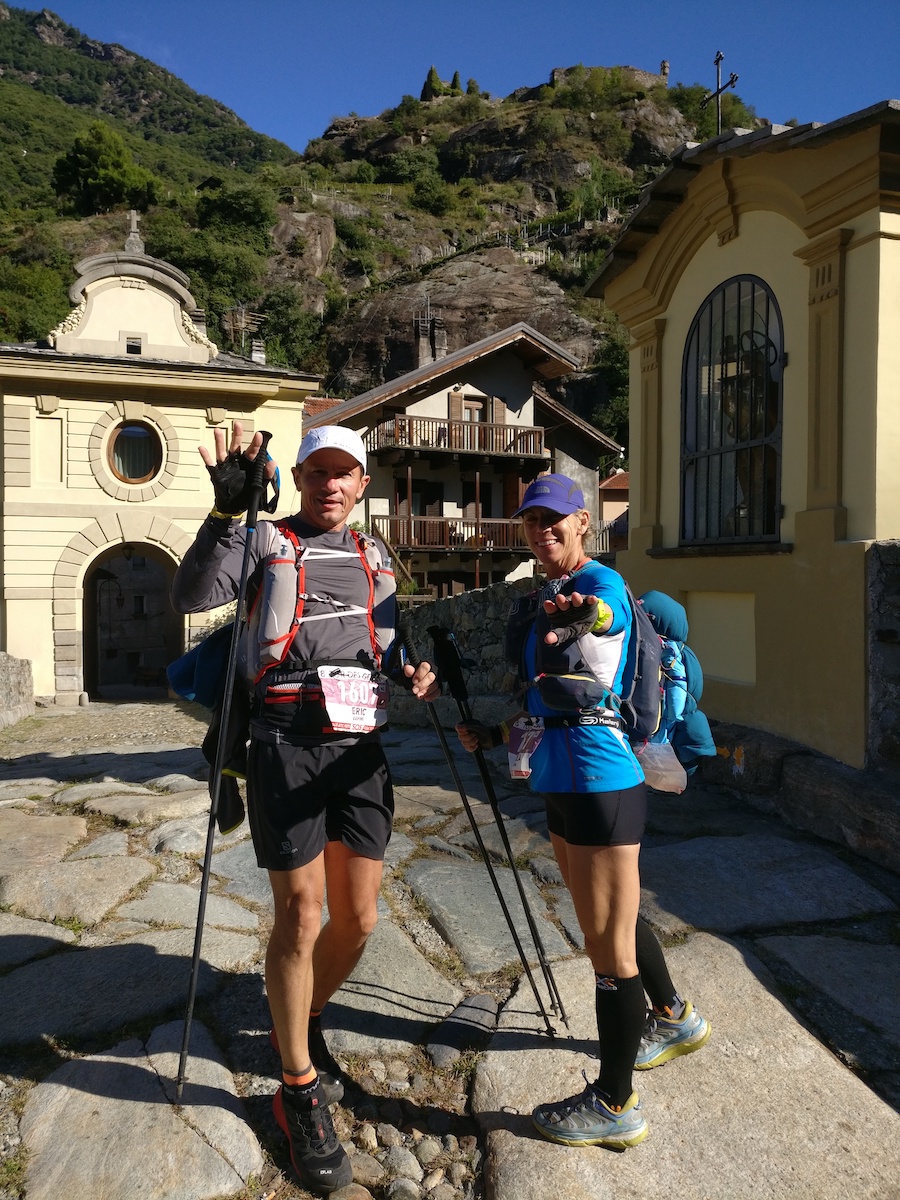 Finding the inner giant that was there all along 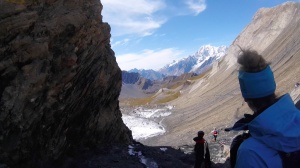 That’s when I stop and think, I’ve got to tone this way the fuck back, or I am never going to make it. I turn to Eric and say, “On doit lever le pied un peu ou on on va jamais arriver.” His face tells me that he is thinking the same thing.

It’s only the first night of the Tor.

I am not disappointed at this thought, to slow down. It was our plan from the start. But I don’t think that we were really convinced that we would have to slow down. It started like any other ultra, although from the start, I kept a slower pace. I felt Eric pulling, wanting to go faster. Get out in front of the mass of people that might slow us down on the first climb. He was like a horse pulling forward, and I was the rider pulling back on the reins.

The sun was shining at the start, and our fears about the extreme cold were fading. We stopped midway up the first climb to Col d’Arp to take off a layer and have a quick pee. When we rejoined the train of trailers, we were at a notably slower pace. Slowly, but surely, we started passing people, as soon as the single track widened out into a larger path. Everyone was polite, no one was pushing, breathing down your neck. It was a long, but relatively easy climb to the Col. I was a bit disappointed that there were not more spectators. More cow bells, like in the Youtube videos. But, hey, it was still pretty fricking cold, so I couldn’t blame people for staying home! And by the end, we would hear a million times, “brava, bravo, bravissima,” and we would hear a billion times those bells for the next five days. 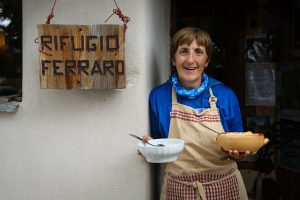 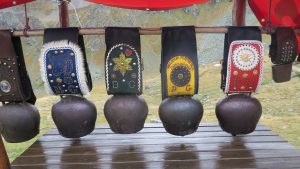 (Imagine, at 2o’clock in the afternoon or 2 o’clock in the morning, sunshine or rain, someone at the refuge is looking across the mountains for you. And when  they see you, CLANG. CLANG. CLANG! they ring those bells. « Bravi! Bravi! » That sound lifts your spirits and quickens your step.)

There are three climbs of 1,000+ meters in the first section. So, we get up and over the first bump (1,300m climb) in good shape and after a quick video of the Malagasy flag at the col d’Arp, we’re down the other side. It’s a fairly gradual zig zag single track, low grass, beautiful mountains all around and sunshine. Pretty nice. 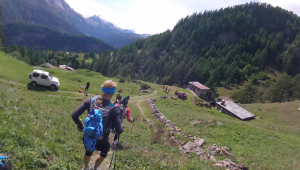 We grab a few snacks at the first aid station, but don’t spend much time. Up we go for the second climb of the day. It goes pretty well, but I am starting to feel my legs. I wait until we are over the top before telling this to Eric, but it makes me feel a bit better, when he says that he feels it too.  No matter how well we trained, nothing can prepare you for straight hours and hours of uphill hiking except straight hours and hours of uphill hiking!

But, we finish the next 2 climbs, and have a great minestrone soup at a little aid station before the downhill to Planaval and the gradual uphill to the first life base, Valgrisenche (which the organization has moved to a village called Bonne, 6km uphill from Valgrisenche. Why is it never downhill from where you expect it? Grrrr). 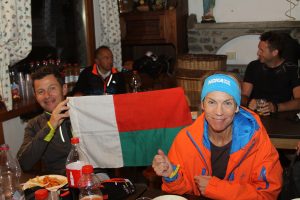 Bonne is a lively refuge. And Alan and Anthony are there. There is someone serving beer from a tap! And there is hot soup, pasta, bread, cheese, ham and all kinds of little cookies and streudel-like cakes. I remember seeing the pictures and the videos of all this great food at the life bases and thinking, I can’t wait to stuff my face. And the first night, I did. But after that it all became less than appealing. It is not that I had stomach problems. Unlike a lot of other people in the Tor, my stomach didn’t turn sour. I didn’t throw up. I knew that I had to eat, but nothing seemed appealing. I think the fact that we were going pretty slow helped keep the stomach in control. 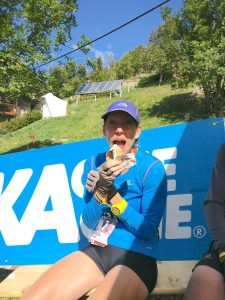 Ice cream was good, especially since my lips were BBQed and freeze dried

My head knew that I needed calories, but I had no sensation of being hungry. Plus, after the first night my tongue started to feel swollen and raw and under my tongue became really sensitive, so anything that had any texture felt like sand paper against the inside of my mouth. Not a great sensation. I don’t know if it was because of the cold and breathing hard through my mouth for hours and hours. We both had a horrible, bronchitis-like cough after the first night. My nose was running like a faucet. It was even like a sprinkler when I was breathing hard. But I didn’t care that I was spraying the contents of my nose on everyone. I don’t think they cared either. I didn’t stop to ask. In any case, my sore mouth didn’t help my calorie intake. 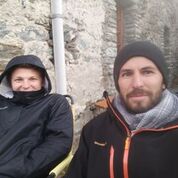 We were so lucky to have Anthony and Alan there! The refuge at Bonne was nice and warm, as most were. I hadn’t really felt the cold on the trail. It wasn’t until we stopped that I felt the chill. And, fool that I am, I didn’t change my wet clothes before I sat down to eat. And so, my teeth were chattering and my hands were shaking so hard I could hardly hold a fork. They covered me up in a big ski parka, so I could stay warm while I ate, because you had to go outside to another building to change clothes, and I had no desire to go back outside just yet! So, we swallowed some pasta, cheese and ham, a coffee and a biscuit, changed our clothes and put on our headlamps for the night. And with heartwarming words of encouragement from our crew, we were off into the night for what was probably the hardest part of the Tor, at least in terms of the number miles to cover and feet to climb. And, did I mention already that its freezing cold? 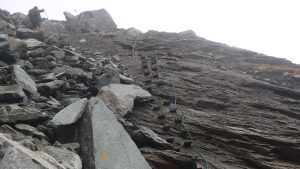 This next section is 58km for over 5,000m of heavy climbing. We jog a bit to get warm again, even 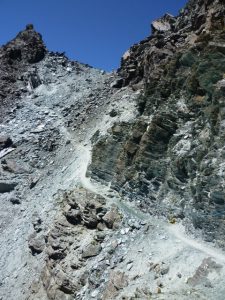 though our bellies are full from the meal we just ate. It doesn’t last long because, what’s this? Oh, we’re climbing again. There is a long, hard climb to Col Fenetre. About two-thirds of the way up, Eric is not feeling well. We take the pace down a notch and decide to sleep a bit at Rhemes. It is after that, on the long, hard, steep climb to Col Entrelor at 3,002 meters that I have my episode, and we realize that we’ve got to slow the pace even more. By the time we reached the super steep, technical bit at the top, we were just putting one foot in front of the other. 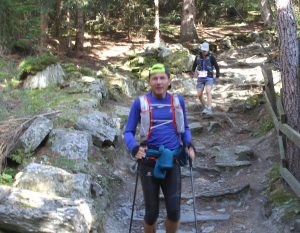 The descent to Eaux Rousse took a long time, and we were so happy to see Alan and Anthony there. So happy that when we left we didn’t notice that someone had taken my 110cm poles or that I had taken someone’s 130cm poles. In any case, after about an hour into the really long climb to Col Loson (3,229m), I had aching pains in my elbows and shoulders. I finally looked at my poles and realized that they were way too long! 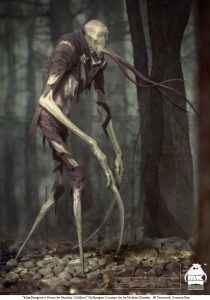 When you have the wrong poles 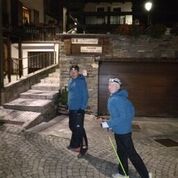 When you have the right poles

Eric and I exchanged poles, so that he had the 130 and I had his 120, and we both held onto them way below the handgrip. And, oh, did I mention that we were climbing? Fortunately, the guys were at Cogne and we asked them to find a place to buy some new poles. There was still 200 km to go! By the time we arrived at the next life base at Donnas, they had new petit poles for a petite person!

I had the beginnings of blisters on the heels of my feet and the rocky descent into Cogne made them sing. So, once we arrived at Cogne, I made sure to take care of my feet. Unfortunately, I can’t remember what I ate or if I ate. I can remember that I didn’t want to eat, and I even had trouble telling Anthony what he should put in my sac to eat on the trail. Gel was disgusting. Snickers was a nightmare. And a peanut butter sandwich was out of the question. And this, my friends, was the beginning of the end of my energy, at least for the next 100km to Gressoney (midway). 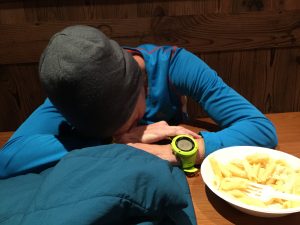 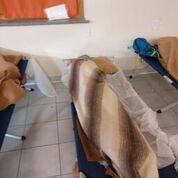 I don’t want to bore you with all the details, and in fact, I can’t remember them. The mountains, the ups and the downs, the unending forest passes at night and an insatiable desire for lemon soda… 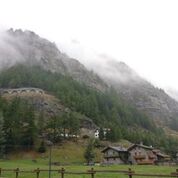 But I do remember that it was in the forest on the outskirts of the towns, when we were approaching the life bases, but still kilometers away, that my hallucinations were most convincing. In the dead darkness of the forest at night, I saw houses, parking lots full of cars, and lights. I heard children laughing and even the clang of the cowbells that greeted us at every village. I wanted to arrive so badly, I was imagining the scene. But Eric assured me that there was nothing, nothing but trees, a river somewhere and more miles of trail

And so we trudged on and on. I don’t even know if we moved quickly or slowly. Mostly slowly, I think. Once the fatigue set in, I wasn’t conscious of our pace, which is probably why we were about 20 hours off our expected finish time! In fact, after the second night, I think my conscious, analytic, reflective brain turned off and the auto-pilot, basic, instinctive brain took over. When someone said “eat,” I ate. When someone said “sleep,” I slept. And when Eric said “run,” I ran. I feel a little bit ashamed, because I can’t remember one time that I said to Eric, “let’s run this.” I’m not a very good giant, I guess. More of a shrek. But at least THERE.WERE.NO.BONES 😉

What I do remember most, and hope I will never forget are the moments that we seemed to fly 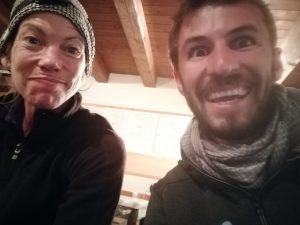 downhill, sharing a bowl of soup under the sunshine, the majestic, snow-capped alps, the pats on the back and encouraging words of volunteers in every village. I remember every moment we 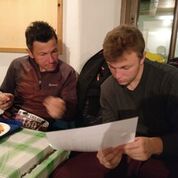 spent with Alan and Anthony, Anthony’s smiles and encouragement, Alan’s jokes and focus on getting us what we needed, and their concern and their willingness to carry me down the last mountain, when it seemed like my legs couldn’t do

And, my Eric, who led and followed, smiled and suffered every second, every minute, every hour and every day with me. Together. 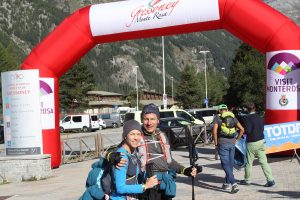 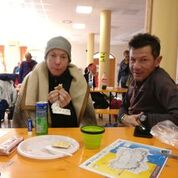 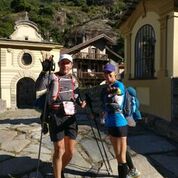 And all the messages, good wishes, concerns and solidarity of our friends and family who were with us virtually. And the very generous donations to FREE TO RUN from all our sponsors to help improve the lives of girls. We will never forget your love, support and solidarity. 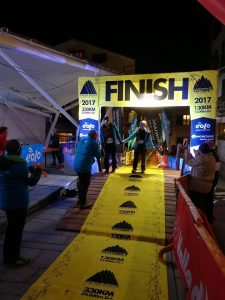 Eric already said it, but I will say it again, we are giants together, and I wouldn’t change that for a faster time or any place on any podium.

We were already on the top step, even before we started, but it was only at the end of this Tor that we fully realized it.